In the city of Windsor, Ont., an older man slowly pedals a tricycle up and down the city’s waterfront path on sticky summer nights. The freezer attached to the front is covered with faded photos of Fudgsicles, Snow Cones and Drumsticks.

Like the men who used to deliver glass milk bottles to your front door, you’d be forgiven for assuming the last of the Dickie Dee men had ridden off into the sunset long ago.

But, it turns out there are still a few good Dickie Dee ice cream vendors riding around on their tricycles with fibre-glass freezers attached to the front selling classic frozen treats to kids — and kids at heart.

The family-owned, Winnipeg-based company was sold to Good Humor-Breyers, a division of Unilever, in 1992.

At the time of the sale there were around 1,500 Dickie Dee tricycles routinely riding around residential streets and parks in about 300 cities, selling ice-cold treats on white-hot summer days across the Great White North.

At its peak in the late ’80s and early ’90s the business employed thousands, predominantly teenage boys, every summer, said Sid Barish, 78, who ran the business along with his younger brother.

By the early 2000s, Unilever had put the ice-cream bike business on ice permanently. The remaining Dickie Dee equipment was sold off to distributors. These days, carts can also be bought by independents, via sites like Kijiji.ca for about $1,000 a pop.

Earl Barish started out as a Dickie Dee boy in Winnipeg, riding for two summers, starting in 1957 when he was just 14 years old.

The owners of the small local business he worked for decided they wanted to sell.

In what proved to be a very savvy move, the Barish brothers’ parents scraped together $2,000 to buy the business, which then consisted of about eight Dickie Dee tricycles.

The business was called Dickie Dee when they bought it and Sid Barish says “there’s not meaning behind it,” as far as he knows.

Earl Barish would not say how much Dickie Dee sold for in 1992, except to say his family grew it in to a “substantial business.”

A key that helped build the ice-cream tricycle business into something “substantial” was the iconic ringing from the bells on the handlebars that would let kids know the Dickie Dee man was coming.

While the business came with the name Dickie Dee the Barish family added the bells, said Sid Barish.

Memories of the Dickie Dee bells ringing brings back a flood of memories for many Canadians of a certain age. How did Dickie Dee become such a beloved brand?

“It’s the ultimate impulse buy,” says Stuart Henrickson, who grew up in Winnipeg and is now the head of the Stu Clark Centre for Entrepreneurship at the University of Manitoba.

When kids heard those bells coming down their neighbourhood street they’d go ask their mother for some change and run outside to join all the other neighbourhood kids already in line, Henrickson said. Often, the Dickie Dee guy was one of your brother’s older friends.

“It truly was a neighbourhood experience,” says the entrepreneurship expert.

But, when the Dickie Dee business was sold to Unilever it went from a neighbourhood experience to one small part of a giant multi-national company.

The focus in the ’90s turned to selling big amounts of food, including ice cream, for small prices at big-box stores.

Dickie Dee may never become a big business again, says the professor, but there is an element of nostalgia those currently pedalling carts, like the rider in Windsor, can capitalize on.

“It’s like Pavlov’s dogs when you hear those bells,” says Henrickson. If you hear them, you’ll likely want to run to catch the Dickie Dee man before he disappears over the horizon as the end of summer nears once again. 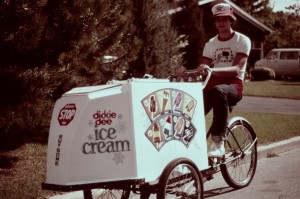